Explore the fascinating life and legacy of Mahatma Gandhi DK Eyewitness Gandhi is a spectacular and informative guide to one of history’s most complex and revered personalities. Striking photographs offer you a unique view of Mahatma Gandhi’s legacy, tracing his life from his early childhood to his assassination, highlighting his affirmation as a leader, his involvement in Indian Independence and his timeless ideas about world peace. Follow in Gandhi’s steps as this book helps you uncover his role in key historical moments, like the Partition of India, the Dandi March and the Quit India Movement. You’ll also be guided through Gandhi’s philosophies and strategies, such as Satyagraha and Swadeshi and given a global view on Gandhi’s impact on events such as World War II. Discover Gandhi’s fascinating story, as each chapter showcases a different side of his complex personality. Meet the shrewd politician and master tactician who challenged the British Empire and learn about the social reformer and economic visionary who championed lifelong education and self-sufficiency for India. DK Eyewitness Gandhi provides the perfect combination of information and great ideas for school projects. Children will learn about Gandhi’s remarkable life and how an individual has the power to change the world. Eyewitness Gandhi also includes a giant fold-out wall chart full of facts, perfect for bedrooms or classrooms. 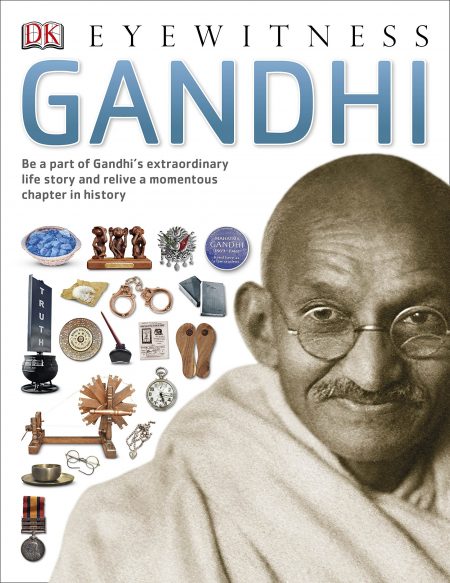